END_OF_DOCUMENT_TOKEN_TO_BE_REPLACED

The Royal Daimler chassis is all chromed up and on display for a limited time in the main hall at the National Museum in Canberra.

With as much fanfare as we could muster, we made a short video of the chassis being set up for display by our registration team. END_OF_DOCUMENT_TOKEN_TO_BE_REPLACED 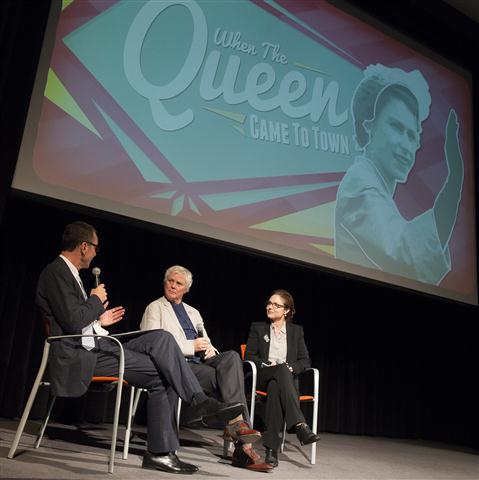 And a good time was had by all. Around 150 people came to see the preview screening of When the Queen Came to Town, at the National Museum on 12 June as part of the Queen’s birthday celebrations. This was a fundraising event for the Royal Daimler project and many came dressed in their fine 50s hats and royal regalia. END_OF_DOCUMENT_TOKEN_TO_BE_REPLACED

The film looks at the legacy and the impact of this Royal visit on Australian popular culture and features the Museum’s Royal Daimler car. The film includes footage of the work the dedicated conservation team at the Museum have undertaken to bring this special car back to its former glory. END_OF_DOCUMENT_TOKEN_TO_BE_REPLACED

In February, 60 years ago, HRH, Queen Elizabeth II, came to Australia. It was 1954, a mere five months after her coronation and the first tour by a reigning monarch.

The Queen’s Royal visit was a two-month journey across Australia. An estimated 75% of Australia’s population were able to catch a glimpse of the young Queen as she travelled to 57 cities including regional centres such as Cairns, Lismore, Shepparton, Whyalla and Kalgoorlie. END_OF_DOCUMENT_TOKEN_TO_BE_REPLACED

There were some very beautiful Daimlers parked at Mitchell recently when members of the Daimler & Lanchester Owners Car Club of Australia, DLOCCA, were in Canberra to visit the National Museum’s grand dame, the Royal Daimler. See more pictures below. END_OF_DOCUMENT_TOKEN_TO_BE_REPLACED

A Virtual Concourse D’elegance for the Museum’s Royal Daimler
This Sunday, 20 October, the National Museum of Australia’s Royal Daimler will make a virtual appearance at the Centenary of Canberra Car Rally on the lawns of Old Parliament House.

Congratulations to all the recipients of the recent Queen’s Birthday Honours Awards.

The image displayed is Sir William Dargie’s ‘wattle painting’ of Queen Elizabeth II. This image is part of the National Musuem’s collection and was painted in honour of the Queen’s first Royal visit to Australia in 1954. A stately DE 36hp Daimler landaulette was used by Queen Elizabeth II during this iconic Royal Tour.

The Royal Daimler is being restored to bring the car back to its former glory in time to commemorate the 60th anniversary of the Queen’s first Royal Tour in 2014.

What a delightful way to finish the week with a $2,000 donation received, bringing our overall total to $11,036.50. Thank you so much to all of our supporters for helping make the Royal Daimler fit for a queen again.

Become a Royal Daimler Conservation Partner by donating $100 or more and receive exclusive updates and invitations.